What are Adaptogens? And How Can They Combat Erectile Dysfunction. 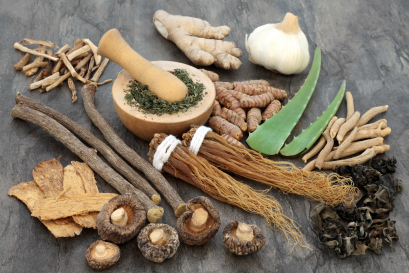 As modern life gets increasingly stressful, remedies that reduce anxiety are gaining popularity.

This makes adaptogens a great option since they are safe, natural, and clinically shown to be effective at relieving anxiety & stress, while boosting mood, focus and concentration.

Growing research also suggests that these same stress busting adaptogens may be useful in resolving erectile dysfunction too.

Exactly what are adaptogens?

Originated in South and Far East Asia, adaptogens are plant and mushroom extracts used by ancient Asian cultures as a healing agent for various ailments.

These botanicals are classified as adaptogens due to their ability to lower stress amongst users.

But an increasing number of clinical studies suggest these same botanicals may also be helpful at alleviating erectile dysfunction.

While there are a variety of plant and mushroom extracts that are classified an adaptogens, some have been shown to be better aphrodisiacs than others.

The most common and pragmatic way to use adaptogens is through a daily pill.

This is where it gets tricky because there are so many adaptogen formulations in the marketplace.

Some adaptogen formulations only contain one sole ingredient in a pill.

Others contain a list of adaptogen ingredients in their formulation.

Below may be the THREE top adaptogens best suited in combatting erectile problems based on clinical studies.

Cordyceps Is a medicinal mushroom, and one of the most popular herbs in the world.

Cordyceps has been revered for thousands of years throughout Asia.

And modern research seems to back all that up.

An animal study published in the journal, Life Sciences, showed that cordyceps helps increase nitric oxide, which is necessary for blood to flow to the penis for healthy erections.

In a double blind, placebo-controlled study, over 200 men with “reduced libido and other sexual problems” showed remarkable results.

On average, 64% of the Cordyceps users reported significant improvement at the conclusion of the experimental period, compared with 24% of the placebo group.

Lastly,  two studies have shown Cordyceps to “significantly increase” the production of testosterone in males.

Health practitioners and Western herbalists widely use Panax Ginseng as an adaptogen to promote a healthier response to physical or mental stress, but new studies show that panax ginseng does much more than that.

The Maryland University medical Center suggests that it can improve libido, or sexual interest.

Panax Ginseng is believed to work by enabling men to adapt to stress with fewer fluctuations in sex drive.

According to the National Institute of Health, Panax Ginseng can reduce the symptoms of erectile dysfunction, or male impotence.

It also shows that men taking Panax Ginseng may have firmer, longer-lasting erections that are easier to attain.

A recent study in Korea examined the effects of Ginseng in 45 men (average age 54) who had documented impotence, defined by the authors as the “persistent inability to achieve and maintain an erection sufficient for normal sexual satisfaction.”

All the men underwent a rigorous, week-long baseline medical evaluation, including testing of their erectile function (or lack of it).

They were then randomly selected to take either 900mg or a placebo three times a day for 8 weeks (the study was doubleblinded, so no one knew who was getting what).

There was then a 2-week “washout” period where none of the men received any pills.

Then there was another 8-week testing period during which the men who had initially received the Ginseng were put on placebo, and vice versa.

60% percent of the Ginseng group of men showed a significant improvement!

Furthermore, the men who took Ginseng reported higher scores for sexual desire and satisfaction in intercourse.

And as it turns out, taking Panax Ginseng by mouth, in pill form, improved sexual function in men with erectile dysfunction.

Clinical evidence also shows that taking Panax Ginseng can decrease blood pressure… This is important because high blood pressure is a MAJOR cause of erection problems.

A study in the Journal of the American Geriatrics Society found that about 49% of men ages 40 to 79 with high blood pressure ALSO had erectile dysfunction.

Another study of men with high blood pressure, published in the Journal of Urology, found that 68% of them had some degree of erectile dysfunction.

For 45% of the men, it was considered severe.

High blood pressure keeps the arteries that carry blood into the penis from dilating the way they’re supposed to. It also makes the smooth muscle in the penis lose its ability to relax.

As a result, not enough blood flows into the penis to make it erect.

In Ayurvedic Medicine, ashwagandha root is used as a stress reducer to fix disease.

It based on the idea that a stressed or troubled mind can trigger biological or chemical imbalances that can lead to illnesses and health problems.

And studies show that it may be true when it comes to male sexual health.

In one study of 150 men that was published by the National Institutes of Health, a significantly greater improvement and regulation of testosterone levels with the treatment as compared to the placebo treatment.

This is not a shocker since heightened stress can overstimulate the production of the stress hormone, cortisol.

Though a necessary hormone, when at excessive levels, cortisol suppresses the production of testosterone.

Adaptogens can a be a part of a health regimen to fix erectile dysfunction.

You can buy each adaptogen in its high concentrated dosage in a single pill.

Or you find a formulation that contains all these adaptogens in a pill.