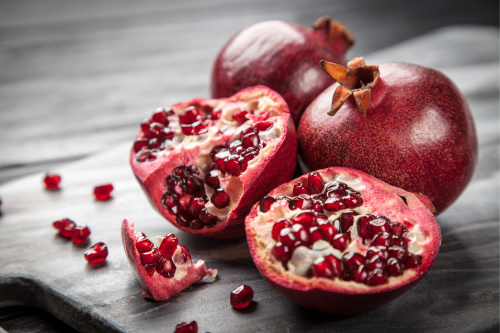 Today you’re going to discover one food that could remedy all three of the worst men’s health problems- ED, an enlarged prostate and prostate cancer.

Over the last decade and a half, a lot of research has shown that pomegranate is a great for your health.

But whats often overlooked is how this fruit can also ease a lot of male, age related ailments.

Read More: When To Check For Enlarged Prostate?.

Pomegranate is a red fruit with a thick, tough peel.

It’s traditionally eaten by carving the fruit in half, plucking out the pomegranate seeds and then sucking out the flesh, before spitting back out the seeds.

As such, many consumers of pomegranate prefer to just purchase pomegranate juice for consumption instead.

And the good news about this is that studies performed on pomegranate involves drinking the juice, not eating the seeds.

So the juice does work.

Pomegranate packs on a lot of fiber, vitamin c & k, iron and potassium.

But its real prize is its high concentration of polyphenols.

Polyphenols are the anti-oxidants that gives the fruit its magic, enabling men to conquer impotence and resolving  urinary and other prostate ailments.

Pomegranate has lots of it.

So much so it has 3 times the anti-oxidant level of green tea and red wine- two food sources that are known to have cancer fighting and cardiovascular healing potential.

Before going into detail how pomegranate can help your erectile, urinary and prostate function, let’s quickly go over…

As men age, the cells and tissues in our penis, urinary tract, and prostate undergo change.

Not only do these changes cause a gradual weakening in our sexual and urinary function, but this also increases the odds of disease in these regions too.

And one of the main reasons for this gradual deterioration…  is oxidative stress.

But in the process, it also produces waste byproduct called free radicals.

To fight off free radicals, our body produces antioxidants.

But its a losing battle because free radicals also enter our through the unhealthy food we eat, alcohol, sugar  and other environmental influences like stress, toxic chemicals and  pollution.

So we end up with excess free radicals, a condition called oxidative stress.

This then leads to chronic inflammation- an ongoing process whereby our healthy cells in our penis and prostate get weaker, … triggering a slow down in our ability to get an erection, losing control of our bladder and worse, when some our cells turn into cancer cells, they multiply and spread in the prostate.

We know that inflammation and oxidative stress is what gives many men prostate cancer.

First, chronic inflammation is linked to 15% of all cancers.

Secondly, chronic inflammation is found in approximately 80–98% of prostate biopsies in elderly men.

Furthermore, daily usage of  anti-inflammatory drugs  like NSAIDS and aspirins have been shown in meta-analysis to reduce  the risk of prostate cancer progression by 15 to 20%.

However, the chronic use of NSAIDs and aspirin causes side effects  including gastric ulcers, renal issues, and in the case of COX-2 inhibitors – heart attacks.

This is where pomegranate comes in.

And in the process, slows the progression of prostate cancer.

For example, in an in vitro study, only 70 micro milligram of pomegranate extract was needed to suppress the growth of LNCaP prostate cancer cells by 50%,

(LNCaP) is a clone of human prostate cancer.

Not only that, Incubation of LNCaP cells over a 24 hour time period at various concentrations of pomegranate revealed that punicic acid, ellagtannin, and punicalogins – polyphenols in pomegranate – was able to stimulate apoptosis, a process where cancer cells die.

Moreover, pomegranate can further slow down or stop the growth of prostate cancer cells by increasing cell adhesion and decreasing cell migration.

By Increasing Cell adhesion, cells are able to better communicate with each other, which is essential at strengthening cell function and suppressing the formation of cancer cells

By Decreasing Cell migration, cells are less likely to veer off course and become cancerous.

Other in vitro studies show how pomegranate shuts down inflammation.

Cytokines and NF-KB— two proteins that are markers of inflammation are reduced by pomegranate extracts.

What’s most impressive are the human studies.

In these  studies, pomegranate extract and juices were shown to stabilize and prolong PSA levels in men with prostate cancer.

PSA stands for Prostate Specific Antigens and are produced by both cancerous and non cancerous tumors.

Though not perfect, the PSA Test is still the  most accurate tool for detecting the presence of prostate cancer.

One study showed that drinking pomegranate juice prolonged the doubling time of PSA levels from 18 months to 54 months.

Prostate patients with short doubling times were more likely to die from cancer.

And more than 80% of prostate cancer patients quadruple their PSA doubling times and this is after just having prostate surgery.

One researcher in the study pointed out  “we were able to prevent or delay the need for hormone treatment or chemotherapy, which brings harmful side effects”

In animal studies, it was demonstrated to prolonging the life expectancy of prostate cancer sufferers,

Mice that didn’t take any pomegranate extracts died in 43 months.

Mice that were fed the equivalent of 16 ounces of pomegranate juice lived to 92 months.

Bottom line, all these studies indicate that pomegranate extract changes the biochemistry of the prostate cancer tumors for the better.

However, the human clinical trials done so far are small, with seldom more than over 100 prostate cancer patients.

So the results are not definitive.

Nonetheless, there is enough evidence to suggest that making pomegranate a part of your every day diet to protect against or to delay the progression of prostate cancer is a sound one.

Especially given that pomegranate is low cost and is not associated with any side effects.

Relieving Symptoms of An Enlarged Prostate

Another prostate disease that’s even more common than prostate cancer is bph, or benign prostate hypertrophy, also known as an emerged prostate.

It’s condition that almost every men will suffer from at some point in life.

It may not be fatal, since the cell and tissue growth are non cancerous..

How its a major life disruptor.

As the prostate tissues grow, it constricts the urinary tract, leading to constant urination and weak urine flow.

Studies show that pomegranate may relieve some of these symptoms..

Because just like prostate cancer, an enlarged prostate is triggered by inflammation.

In rodent models,  prostate inflammation has been shown to cause an enlarged prostate.

In humans, inflammatory cells  have been spotted in  prostate tissue specimens from men with BPH.

Moreover, the presence or degree of inflammation has been found to be correlated with prostate size and the severity of peeing problems.

However, this was  a modest size study and the time of treatment was within 4 weeks very short.

Nonetheless, it shows that pomegranate can reduce the inflammation that makes you want to use the restroom all the time.

Onne study that shows that pomegranate can increase nitric oxide by 23%.

And improved nitric oxide has been show to improve urinary tract function, which should help with urinating.

That’s because its positive effects on sexual health.

Not only has pomegranate been shown to increase sexual desire, it also can clear arteries so more blood could move into the penis.

In a study reported in the International Journal of Impotence Research, 42 men struggling to achieve and maintain erections consumed pomegranate juice daily.

After 4 weeks, 25 of the 42 subjects (60%) reported better sex, better orgasms, and improved sex drive and stronger erections too.

In another study conducted by the University of California, Los Angeles (UCLA), 61 men with erectile difficulties took pomegranate juice for a month.

At the end of the study, 32 % of the men reported much stronger, satisfying erections.

How does pomegranate help erectile performance?

Not only that, all these antioxidants and nutrients in pomegranate  are capable of protecting or even help clear out arteries: fighting free radicals and inflammation, both which damages penile arteries and build up plaque in the blood vessels.

As such, pomegranate can clear the path for better blood flow into the penis for stronger, healthier erections.

Some clinical studies on pomegranate also suggest that it may help better regulate both blood pressure and balance blood sugar, triglycerides and cholesterol.

This is important to also point out because – blood pressure and cholesterol in addition to high blood sugar – can damage and clog arteries, making it extremely difficult for robust blood movement to the penis.

Pomegranate can also increase testosterone too.

Testosterone also play a huge role in the erection process.

The Journal of International Sports Nutrition report that testosterone in men were increased after just days with daily ingestion of pomegranate juice in conjunction with weight-lifting exercises.

In another study published in the Endocrine Abstract, daily consumption of pomegranate juice increased testosterone levels by 24% in the 60 participants the study rescruited

Another benefit of pomegranate is that it contains a polyphenol called urolithin A,

And Urolithin A might be able to improve mitochondria.

Mitochondria are tiny particles inside your cells that fuels its energy.

Without it, our cells would be dead.

Problem is that with age, mitochondria function declines.

And this is associated with male sexual function, especially with diabetes.

Overall, there is strong evidence to suggest that pomegranate is the superfood that can help men with sexual difficulties overcome their erectile issues.

Also important to note is that 8 ounces of pomegranate juice was consumed daily in all of these studies.